My 1999 Master’s thesis in cultural anthropology was called Gender Pretenders: A Drag King Ethnography. Focused on a set of women performing in drag as men in NYC, it explored the idea of gender as a set of signs, rather than a fact of biology. My recent personal website update caused me to go back and look at the work again, 16 years later; the first paragraph rang like a bell in my head:

I have never taken gender for granted. As a very young girl, I was convinced that I’d grow up to be a big, strong man; needless to say I was somewhat disappointed when puberty hit and made it quite clear that was not going to happen. As a short-haired, overweight tomboy, I grew used to adults calling me “son” and, “young man,” and as a masculine woman have come to expect the occasional “sir.” But I am not transgendered; I’ve grown to love being a woman, to appreciate my female body, and to value my identity as a lesbian. I do not feel”like a man” and do not want to be one; still, I am often accused of harboring such a desire. I am told that I dress like a man, I talk like a man, and I look like a man; surely I must want to be a man?

I’ve obviously been thinking about my own gender for a long time. What stands out here is the description of my childhood, accurate now as it was then. It’s the first thing I tell people when explaining my recent decision to transition. What follows, however, is a strong statement of denial. I said four things which now require reconsideration:

“I am not transgendered” – The more honest statement at the time would have been, “I don’t want to be transgendered.” I didn’t know for sure that I wasn’t, but I did harbor a suspicion. Why else was I focusing on gender in my graduate studies?

“I’ve grown to love being a woman” – This was and is still true. I believe that women have a more flexible range of cultural expression (for example, in terms of dress) than men do; women are also encouraged to have and communicate emotions more so than men. This worried me until I realized that it’s okay to be an expressive man. And I admit that I grew, over the years, to believe in a sort of female superiority — in a “if women ruled the world, then there wouldn’t be any wars” kind of way.

“…to appreciate my female body” – This is a flat-out lie. I’ve never appreciated anything about my body below my neck. I’ve never really been in my body to begin with. I wrote the statement because I knew it was the most important thing to say if I were to convincingly deny that I was transgendered.

“…to value my identity as a lesbian” – This was and is still true. It’s one of the things I’ll be giving up in my transition. This troubled me for a while until I realized (a) I’m still queer and (b) I’m still a feminist.

There are straight men who claim they are “really just a lesbian in a man’s body.” I will be.

The Freedom Tower (now simply referred to as One World Trade Center) is currently under construction in New York; here’s a view of the work in progress compared to an artist’s rendering of the finished product.  Am I the only person who finds this troubling? Look at that photo and imagine 25,000 people inside.  Such hubris. 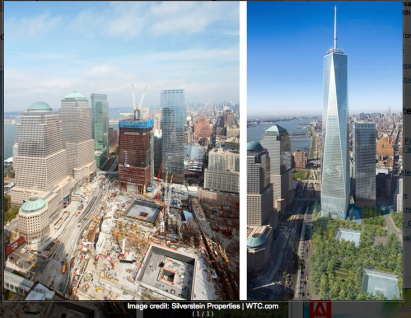 I’m a native New Yorker. I lived there most of my life. I happened to leave just two months before September 11th and have not lived there since.

It’s ten years later and the country has changed.  I’ve changed. But I’ve been back a few times and in New York, it’s still September 12th.  The flags are still flying,  the towers are still gone, and the dead are still mourned. Ground Zero is still . . . zero.

Today,  they’re on high alert. The ten year anniversary brings new (old) threats. New York will never be the place it was before the attacks, but it’s still the place it was right after them. Time stands still in one place while the clock turns back around it.