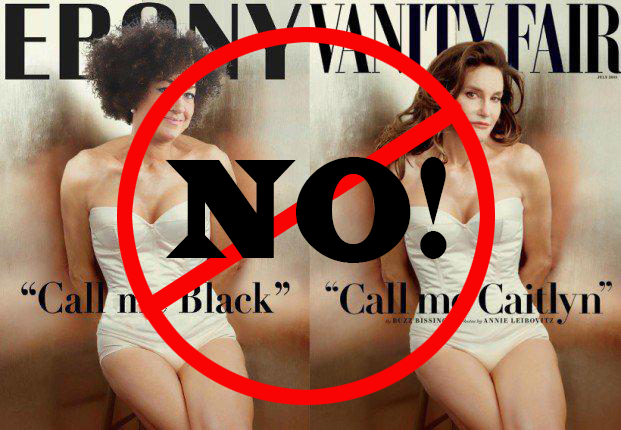 The discussion around Rachel Dolezal takes as its starting point the fact that she occupied a job at the NAACP that should have been filled by an African American person. Her appropriation of “blackness” is consequential only in that regard; who cares who she thinks she is? It doesn’t matter until she steps on someone else — in this case, by taking a particular job and making herself the representative of a population of which she may not be part. The question of whether or not she was qualified for the job based upon the sole requirement of her being African American is the legitimate point of concern.

What, then, is the definition of “being African American”? Most people think it’s based on skin color, an incredibly variable and superficial trait. If so, then how dark do you have to be to qualify? At precisely which point in his life did Michael Jackson stop making the cut? He got lighter; Dolezal got darker. If Jackson didn’t make himself into a Caucasian and Dolezal never actually became an African American, then skin color is clearly not the right definition.

I’m an  anthropologist, so let’s talk science: From a biological point of view, “race” is a thoroughly ridiculous idea (see Podcast #13). Don’t let me confuse you; racism is as real as a fist in your face, but “race” has no genetic validity. Despite what you may have seen on Bones, there is no magic combination of genes or skeletal features that instantly reveal an individual as “black” or “white,” in part because these color categories are culturally defined: The line between them moves depending on where you live. Folks who are “black” in America are “white” in Brazil. In America, in fact, there has been so much intermixing between people that many “black” folks have “white” ancestors and there are plenty of “white” folks with “black” great-grandparents.

Being African American is probably best defined as being subjected to racism based on the assumption that you are African American. Think about it. How many “high yellow” celebrities are out there passing as “white” and experiencing no racism at all? The black community is itself conflicted about whether or not these folks are even “black.” That’s because being “black” or “African American” is about your experience, not your genes.

This being the case, the important question becomes: Did Rachel Dolezal have an African American experience of life? Did she grow up black? Does that experience inform her perspective? The obvious answer to this is no; as a light-skinned child, she was not socialized as African American. She was never a black teenager. She never faced any of the challenges that people of color face growing up in America. On these grounds alone then, she was not qualified to hold the job that she occupied.

Perhaps she began passing as African American at a point in her life significant enough to have acculturated and become, for all intents and purposes, “black.” Forgive me a terrible metaphor: Like a young American who moves to France, learns the language, and lives there for the rest of his life; he’s pretty much French. Does anybody care that he was actually born in America? Only if he runs for office.

It’s okay with me if Rachel Dolezal identifies as African American. That’s her life and her experience. What’s not okay is that the she didn’t meet the unspecified, unspoken requirement of the job: she didn’t grow up black.

Lots of people think Dolezal is a faker. A pretender. I think her identity is her own business. I also think we could spend some time questioning the job’s base requirement of her blackness to begin with, but that’s for another time.

The point I’d like to make right now is that THIS HAS NOTHING TO DO WITH BEING TRANSGENDER. Rachel Dolezal has nothing to do with Caitlyn Jenner. I call BULLSHIT! on comparing them.

Being transgender is about recognizing that your gender identity crosses the boundary between the sexes; trans literally means “across.” Trans* people see themselves as some combination of male and female because their physical bodies don’t precisely correspond to their idea of themselves. They struggle to reconcile the incongruities. It’s true that trans* people may pass as the sex other than the one to which they were assigned at birth, but this is usually recognized as a matter of survival rather than choice. Trans* people almost always grow up trans*.

Rachel Dolezal didn’t grow up transracial. She was a white child who claimed, as an adult, that she had always been black. That’s called lying.

Can a person even be transracial? I don’t know. Maybe. Perhaps we should ask Eminem or Marcus Samuelsson? I bet their answers would be interesting. But the idea that Rachel Donezal’s lies can call transgender identity into question is offensive and ignorant.

Caitlyn Jenner told us who she is with courageous honesty. Rachel Dolezal lied her way into a job. How dare you use her to undermine trans* identity!