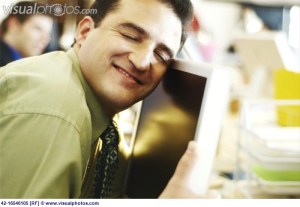 Several years ago, I joined Facebook in my non-Anonymous life. What began as mild curiosity was immediately transformed into an addiction which, like so many others, instantly became a problem. Countless hours of obsessive status update checking aside, eventually the need to speak my mind trumped the need to watch my mouth and I embarrassed myself. So I terminated – as much as that is possible – my account.

Recently, I was compelled to rejoin. Having grown up a bit, Facebook is now seeing more professional use as a networking tool – so there was no avoiding it.  Immediately re-friended by all, it’s clear that something has changed: Nobody’s poking me. Nobody’s sending me virtual crap. Nobody’s writing on my wall.  In the interim they’ve all learned: That’s not what it’s for. It’s for me to write on, to update you of my status. If you care.

Nice, isn’t it? I don’t have to engage with you and you don’t have to deal with me, but we both know we’re there, watching each other’s lives transpire in all their mundane details.  It’s a phenomenon that Leisa Reichelt has labeled “ambient intimacy.” Your Facebook friends function as background music, essentially. They’re always there, softly humming behind you.  They’re like the running banner at the bottom of the news.

But they’re more than that; they are your audience.  Find a twenty dollar bill on the street? Nice. You can tell your buddy about it when you offer to pay for dinner — but you’re not going to call every friend you know.  Post it on Facebook, though, and 16 people “like” it. It makes you feel connected in a no-strings way: Feel free to ignore me until I say something that interests you.

“Welcome back,” says Facebook. “Not that we missed you.”

3 thoughts on “the ambient embrace”