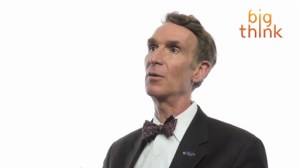 Bill Nye: Creationism Is Not Appropriate For Children

“Evolution is the fundamental idea in all of life science, in all of biology. It’s very much analogous to trying to do geology without believing in tectonic plates.  You’re just not going to get the right answer. . . And I say to the grownups, if you want to deny evolution and live in your world that’s completely inconsistent with everything we observe in the universe, that’s fine, but don’t make your kids do it.  Because we need them. We need scientifically literate voters and taxpayers for the future. We need engineers that can build stuff, solve problems.” – Bill Nye

Thank you, Bill Nye, for speaking truth to ignorance. I wonder if the folks who believe in creationism typically accept the will of God and allow themselves to die when they get sick? No, I’m betting that the majority of people who call themselves Christians go ahead and get their yearly flu shots. They believe in the efficacy of the vaccine with the same blind faith that causes them to reject the science that produced it in the first place. Irony, party of several million?

The flu vaccine would not exist if scientists did not have a firm grasp on the facts of evolution. It is updated yearly to keep up with the evolution of the virus, which changes so much and so quickly that the previous year’s vaccine is no longer effective.  How do these changes occur? You might think that the answer is mutation, but that’s only a small part of the process.  Mutations are random, but the virus keeps growing more drug-resistant. Clearly there’s something else going on here.

When you get a flu shot, your body gains the ability to produce antibodies to the flu virus; if you are exposed to it afterwards, your body fights it off.  The antibodies kill most, but not all of the virus particles. Some virions have genetic variations that allow them to survive the onslaught of your antibodies. They aren’t any better or stronger than the others; it’s just genetic randomness.

Eventually these survivor virions will be passed onto someone else whose body will perform the same process, helping to weed the virus population down to only those virions that are completely resistant to the vaccine. The following year when their descendants return, they will be immune to it. They will be genetically different from the ancestor virus. They will have evolved from a previous state.

This is evolution, plain and simple. Science has proved it, and you already believe in it. If viruses evolve – and clearly they do – then evolution happens, right? You can choose to believe in science when it works for you and dismiss it when it doesn’t, but don’t expect the rest of us to think that you’re making any sense. Not everyone can handle that kind of cognitive dissonance.

Teaching your kids that evolution is wrong is like teaching them that the world is flat. It’s incorrect, and it does them a disservice. Teaching your kids that creationism stands on equal footing with science cannot be called “educating” them. Is it your goal to inform them, or to keep them in ignorance? Would you like them to invent a cure for your eventual Alzheimer’s, or would you prefer them to simply pray it away?

I’m not knocking your faith; that has its place. Just don’t let it get in the way of your intellect.