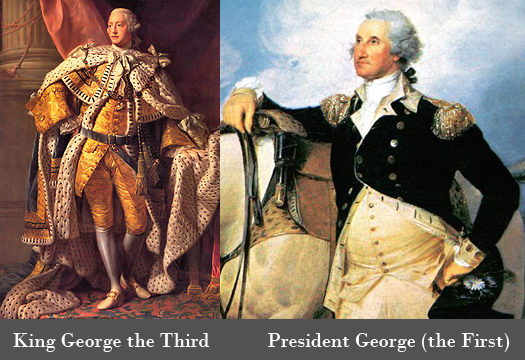 According to Mitt Romney, 47% of Americans believe that the government should take care of them in some way. Paul Ryan, the numbers guy, says it’s 30%. They say it like it’s a bad thing. It’s not. The number should be closer to 100%.

Let me explain: We had a revolution quite some time ago which freed us from the tyranny of a kingdom and established a democracy. Whereas a king rules by right of inheritance, a president is elected through the will of the people. A king stands above all others; a president is first among equals.

A king typically inherits his right to rule through a line of ancestry that connects him to a figure recognized as important to the establishment of the country.  His power is legitimized by his biological connection to the birth of the people and of the culture, and his authority is conceived in paternal terms. The country is his; it belongs to him and he may do with its land, its people, and its army as he sees fit. He is, however, obliged to see to it that his lands are farmed, his people are fed, and his armies are supplied.

Did these responsibilities of government just fade away when we replaced a king with a president? Clearly we are still subsidizing our farmers and supplying our armies, so what happened to the other piece of it?

Remember this: “We hold these truths to be self-evident, that all men are created equal, that they are endowed by their Creator with certain unalienable Rights, that among these are Life, Liberty and the pursuit of Happiness.–That to secure these rights, Governments are instituted among Men, deriving their just powers from the consent of the governed. . .”

Was this not what Jefferson was talking about? How can one be entitled to life but not medicine? Liberty but not food? A shot at happiness but not the benefit of shelter?  Don’t these things all go together? I believe that Jefferson thought his language was broad and inclusive: Let’s see, he reasoned; what three words can I use to represent all “unalienable Rights”? Oh, yes! I’ll say, “among these,” and cite the big ones! “Life,” for crying out loud! How much more inclusive can I be?

Conservatives deride an American sense of “entitlement” (oh, the irony!), where people think they deserve government assistance for which they should not have to work or pay. They think a lot of us are stupid, irresponsible, and lazy. The truth is, we are all raised to believe that life is meaningless without work – which includes raising children – and that we are useless without it. Most of us want to make an honest living. That, it’s patently obvious, is not always possible.

It has always been the job of the government to see to it that people’s basic needs are met. From chiefs to kings to parliaments, the primary charge is to keep the peace and provide the food – the latter being necessary for the former. As long as there has been government, that has been the case.

Democracy didn’t change that; capitalism did.