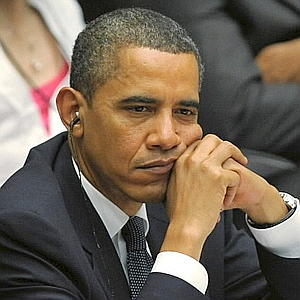 Last night, you spent the first two-thirds of the debate looking like you’d prefer to be off celebrating your wedding anniversary with your wife. I don’t blame you. Most of America would have sided with you on that one. You looked tired and weary. I had a profound desire to hand you a Red Bull and give you a refreshing slap. WTF?

First of all, why in the world did you agree to a debate on the night of your wedding anniversary? Was that really necessary? You could have chosen another night and had a clear head for it. And while we were all aware of the occasion and expecting you to mention it at some point, leading with it was awkward. It came off as resentful. Evidence of the fact that you would have preferred to be somewhere else.

Secondly, why do you persist in being so damned nice? Do you think it’s getting you anywhere? Really, Mr. President, you do not need to point out the places where you agree with your opponent before you go on to discussing your differences; you’ve lost us by then. Can’t you just lead with the contrasts? Have you learned nothing about our attention span? Or did you not hear the sound of channels changing across America?

Most importantly, why do you resist attacking your opponent? He’s your OPPONENT. You ATTACK him. There is a history of lies and conflicting positions there for you to exploit, a wealth of blunders and misstatements to cite. Speak them. Number them. Repeat them. Our memories are short.

Lastly, I’d like you to reconsider your audience. You spoke to the American people last night with the tone of a man who holds us in high regard. Please lower your expectations. America is not Harvard or Columbia. America is Denny’s and Fox News. You need to speak the language.

You can do it. Just pretend you’re seventeen again.