hypanis.ru It's time for President Badass! | The (Formerly) Anonymous Anthropologist 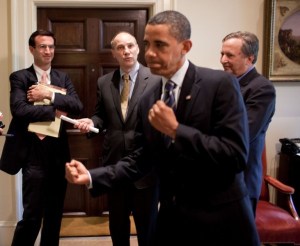 Well, Mr. President, you did it. Much to the surprise of your opponent and his backing billionaires, you triumphed.  So now that your second term is secured, I’d like to speak to you on behalf of your liberal voters.

Many of us who voted for you the first time did so with the knowledge that your actions would be constrained by the requirements of your seeking re-election. In other words, we knew better than to expect big things from you during your first term. We figured the payoff would come during the second.

Needless to say, you accomplished a hell of a lot anyway, especially considering the fact of complete Congressional obstruction; for that we are grateful. Now, however, is the time for a change in strategy.

We have seen you reach your hand “across the aisle” to achieve bipartisan consensus, only to have it spat upon by opponents who despise you more than they actually disagree with you. We have seen you embrace their ideas, contrary to the desires of your base, only to have them disavowed by their proponents. We have seen you give ground at the beginning of negotiations, fully expectant of reciprocal concessions which were never forthcoming. It’s time to stop trying to meet them in the middle, because they are far to distant from it.

Do not make the mistake of thinking that the Republicans are suddenly going to become cooperative. They will never do anything that threatens to make you look good.  They hate you.

We know that you are a good man in a difficult time who is sincerely doing his best to do right by his country. We know that your are playing what has always been a white man’s game and are amazed at and proud of your ascent. You make us proud of our country. You more than make up for the embarrassment caused us by your predecessor.

Sir, we require no more convincing. We know that you tried, we know that your opposition is intractable, and now we just want you to go back there and haul out President Badass. It’s time to start dominating.