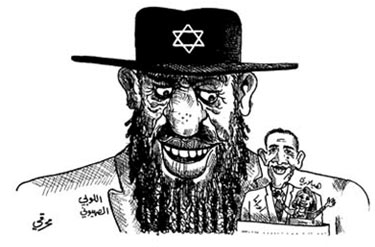 When progressives and others protest the pro-Israel policies of the US, they typically assign blame to the Jews, a.k.a., the “Zionist Lobby.”  This is depressingly true to historical patterns:  The Jews are consistently perceived as controlling everything from the media to the government.  Well I’ve got news for you: It’s not the Jews. It never has been.  They’re just such an incredibly convenient scapegoat in a world dominated by Christians.

Jews make up something like 2.5% of the general population of the US, and the great majority of them are secular and non-practicing.  They are also typically highly educated, liberal, and progressive.  I’m convinced that most secular American Jews are horrified by Israel’s settlement activities and disgusted by its suppression of Palestinian rights. They are embarrassed by association with it.

The small minority of pro-occupation Jews make up less than 1.5% of the American populace – do you really think they have enough money between them to pull the puppet strings on foreign policy? That’s just ridiculous.  Rupert Murdoch is not Jewish; either are the Koch brothers.   The 111th Congress was 8.4% Jewish and 84.8% Christian, and the Tea Party Caucus in the House alone is currently 45% evangelical.  So who’s really running the show?  Clearly it’s the conservative Christians. Just look at the legislation they’ve been working on: Not a single jobs bill, but lots of renewed interest in outlawing abortion.

Christian conservatives have taken over the American government.  Republicans since Reagan have used their faith as argument and justification for their policies.  Lately they hold suspect any among them who do not express both a belief in creation and the firm denial of science, particularly where it applies to climate theory.  A good many of them, men like former attorney general John Ashcroft, are biblical literalists who fully expect the rapture to occur during their lifetimes and see current events in the Middle East as the fulfillment of biblical prophesy.  Simply put, the Jewish homeland must exist if conditions for the rapture are to be met.  Men like this don’t worry too much about the future because the world is ending anyway, but they do need to assure the survival of Israel.

From the very beginning, it has always been Christians who felt connected to the holy land as a site for pilgrimage and were loathe to see it in the hands of Muslims.  While to them, the Old Testament is the source of original truth, the Qur’an is a post-Christian heresy.  The state of Israel was in fact made possible first by the Balfour Declaration and later by the UN partition of Palestine.  While Britain had from its very beginning a tradition of religious pilgrimage to Palestine and a desire to see it avoid Muslim control, the UN was moved to do something after the Holocaust drove home the fact that Jewish safety could not be assured in anything but a Jewish land. Were it not for this commitment by Christians to support and preserve the Jewish state, it likely would not exist.

Today conservative Christians continue the traditions of pilgrimage and Islamophobia.  Missionaries went into Iraq before the smoke from our bombs even cleared, claiming humanitarian missions while their supporters spoke of the war as a “crusade.”  Because we live in the shadow of the millennium, some Christians are genuinely puzzled as to why the rapture has not yet occurred; indeed, they anticipate its imminent arrival.  They attribute earthquakes and dead birds to the wrath of God, as if the scientific revolution had never occurred.  The Republican party is now dominated by people who think like this, despite the fact that they actually constitute a small minority of the country.  They are, however, the majority block of primary voters.

It is in fact the minority of a minority that is currently steering the ship of American foreign policy, but it’s not the Jews.  It’s the apocalyptic Christians who aren’t just waiting for the rapture, but are actively working to assure it.

I have a theory: The rapture has already happened; it’s just that they all got left behind.