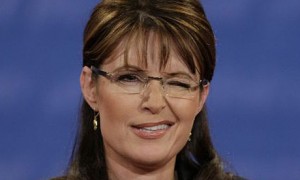 Excuse me, “shuck and jive”? WTF, Sarah Palin? Who uses that kind of language these days? Are your bedsheets doing double duty at KKK rallies?

Let’s just call this the racism that it is: the racism of Sarah Palin’s America.

We heard the McCain-Palin campaign blowing the dog-whistles of racial hatred during the last election, when a huge and ignorant swath of the American public convinced itself that then-Senator Obama was a Kenyan Muslim. We heard it even in the so-called compliments paid him: He was so “articulate” for a – well, you finish the sentence. We hear now it in Newt Gingrich’s characterization of Obama as the “Food Stamp President.” By that logic, we ought to christen Reagan the “Crackhead President.”

The level of hatred directed at this President is unprecedented. I have looked and cannot find any campaign imagery comparable to the 2008 posters of Obama in white-face, Obama as The Joker, Obama as Hitler. I can’t recall anyone putting a Hitler mustache on George W. Bush.*

I have looked and cannot find a previous Congress so specifically dedicated to denying a President a second term, such that it votes against its own ideas to avoid making him look good. Even Bill Clinton had greater cooperation from the opposition.

It’s only been about fifty years since the official end of Jim Crow, when African Americans were fully enfranchised as voters. There are plenty of white folks still around who remember the days of segregation fondly, when they didn’t have to compete with non-whites for jobs or college admissions. There are lots of people who have never worked or socialized with African Americans and who would be happy to keep it that way. They are simply not comfortable with people who are not like themselves. They never have been, going back through the generations. There are plenty of white folks who resent the handouts of welfare without knowing that they are its primary beneficiaries.

When you live in the Northeast or on the West coast of the U.S. – the blue states, yes – you tend to see the world a certain way. Your point of view is inflected by the diversity of the population. You grow up with Americans whose families have come from all over the world, with people of all faiths and colors, and this to you is normal. It’s true, to a large extent, of any port city or point of entry for immigrants; they often remain where they land.

When you live in middle America, however – in the red states, yes – you are more likely to spend your entire life in a small town surrounded by people who are a lot like you. You are rarely exposed to a point of view that differs from your own and when you are, your peer group shoots it down.

If we held an election where the popular vote alone determined the outcome, the result would always skew to the political left. That’s because the great majority of the population lives in cities, which provide employment and transportation and which therefore attract outsiders.  These places are always necessarily more diverse and more progressive. The fact is, we could hold the election exclusively in America’s largest cities and obtain a representative vote.

Rural middle America has too much say. It is numerically over-represented in the Senate (2 Senators per state, regardless of population) so it has disproportionate power over policy. Relative to urban America, rural America is less diverse, less progressive, and less comfortable with the 21st century global culture that city dwellers deal with every day. Rural America has barely come to grips with the 20th century.

Mitt Romney is counting on two types of voters to make him President: People who believe he’ll be a better leader than our current one, and people who will vote for anyone but a black man. I believe there are far more Romney voters in the latter category – and so does Sarah Palin.

* While I have recently been corrected by a reader and directed to some photos of Bush with a Hitler ‘stache (see Comments), I stand confidently by the rest of this essay.