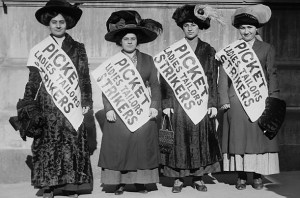 The beginnings of the labor union movement in America.

Republicans appear to be mastering the art of turning back the clock. State by state, they are generating a great wave of anti-union legislation that is being met with apathy and ignorance by most Americans. I’m not sure what to do about the apathy, except to address the ignorance.

If you watch MSNBC, then you know that the reason for the Republican attack against unions is purely political: they are out to disable the funding machine of the Democratic party. Since the GOP tends to represent the interests of the business community, most of their money these days comes from titans like Sheldon Adelson. That one man almost succeeded in buying a Presidential election – talk about an American success story! The Democrats, on the other hand, tend to bat for the middle class which, by definition, has no money to give them. That’s because they work for a living. The only place you can reliably find them doling out cash is to their labor unions, who then forward it to the Democrats. Kill the unions, kill the Democrats’ funding.

That’s exactly what these so-called “right to work” laws do: The legislation is written specifically to outlaw compulsory union dues. So you can join a union and enjoy its protections without shelling out a dime. It’s a pillow over the face of the Democratic party.

The unions themselves will have a difficult time surviving this. No one outside their membership appears to care. The Bureau of Labor Statistics data for 2011 shows that only 11.8% of American workers belong to a labor union. That leaves the great majority of us uninformed about their importance and perhaps resentful of their influence. So these laws get passed and we either don’t pay attention or figure they’re justified. Our ignorance is shameful.

Last night we had a dinner conversation with our teenager. You can go to the mall, we said, and get a lot of stuff for a little money. But none of it is made in the US. It’s made in China or Indonesia or someplace where the labor is cheap. Those are jobs that could be here in America but if they were, everything would be more expensive.  Labor is cheaper overseas because the people work in terrible conditions with virtually no rights for almost no money, while the companies pollute the local environments because they’re not subject to American regulations.

How can they do that to people? A good question, we said. It’s because they don’t have the history that we do. They never had a labor union movement to stand up for and defend workers’ rights. It used to be like that here, too.